When the weather cleared, we traveled down the ICW behind Jekyll Island at high tide. Our sounder indicated that we would have been aground several times at low tide. We anchored off a salt marsh on the north end of Cumberland Island at Burbank Point. We did not go ashore here because of the "Warning Private Property" signs. The island is a mix of private and federal park land.

Cumberland Island is a complex ecological system consisting of dunes, forests, and saltwater marshes. The marshes are made up of smooth cord grass, pulsing with tidal flow which feeds an array of flora and fauna. In the interior is a maritime forest of saw palmetto and live oaks covered with spanish moss and muscadine vines. The eastern side is the National Seashore with beautiful white powdered sand dunes and beaches.

The next morning, we had to wait for the thick fog to clear and then sailed to an anchorage off the southern end of the island near Dungeness. As we pulled into the anchorage, we saw a wild pony on the beach. The forest was buzzing with the sounds of birds. We decided to walk the island and picnic on the eastern dune beach. We walked through the mottled light of the forest and found tracks of wild horses, boar, deer, coon and armadillo and spied many of the creatures themselves. We had the perfect picnic in the dunes overlooking the ocean.

Later, we walked down the beach to the southern end to explore the Dungeness ruins and Green-Miller cemetery before nightfall. It was getting late and we heard the spooky hoot of a great horned owl as we entered the cemetery. We found the graves of Thomas Carnegie (Andrew's brother) and Revolutionary War General Henry Lee (Robert E's father). In the remaining light, we explored the Carnegie mansion ruins built upon those of Nathaniel Greene's Dungeness, which was named for Oglethorpes 1736 camp at that location.

Standing there looking at the ruins in the evening light, we could imagine the music and laughter carried on the night air from a Dungeness party during the Guilded Age. The 1920's saw a decline of the use of the mansion. When it burned in 1959, it had not been used for many years. As darkness fell, we walked the two mile trail back to our dingy at the dock, listening to the sounds of night creatures on all sides. The sunset silhouetted the boat as we rowed our dingy under the glittering stars.

We left Cumberland wishing we could stay longer but we wanted to beat the advancing storm front. We made a quick passage offshore to Mayport, Florida near Jacksonville where we weathered the storm. 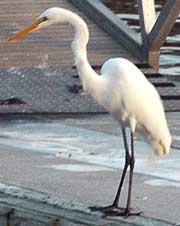 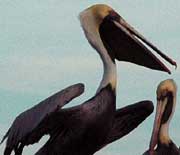